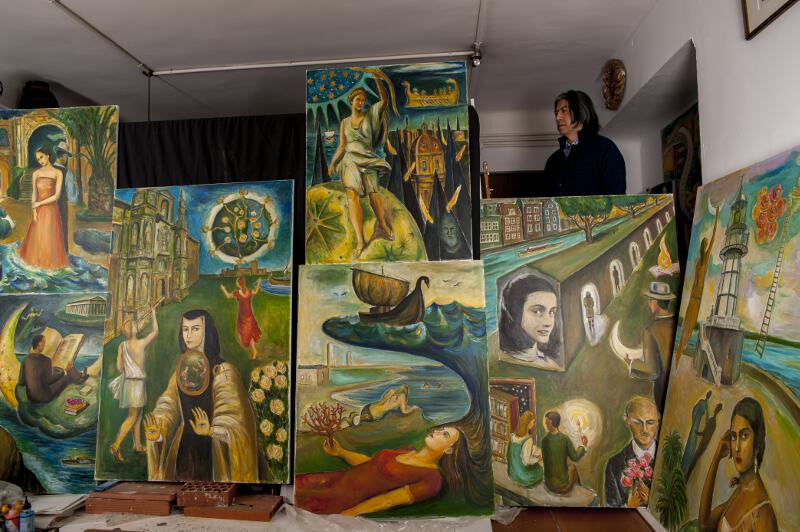 Yurihito Otsuki is a painter of Japanese origin, settled in Spain for many years and currently resides in San Lorenzo del Escorial (Madrid). His paintings are characterized by their great symbolic and mystical power, a magical realism and unique between the dream and the poetic reality. Through his personal technique of acrylic with special treatment, the works achieve the brilliance of his exquisite color and the depth of his particular drawing; The effect similar to the renaissance and timeless painting. Yurihito Otsuki obtains the maximum estimate of great critics and writers from Spain and Japan: like Tomás Paredes (President of the Spanish and International Association of Art Critics, AECA / AICA), or Makoto Ooka (poet and critic of Japan's most distinguished art of the Imperial Prize).

His artistic practices are not limited to painting, but extend to music as a pianist, dance as a choreographer and literature as poet, translator and introducer of great poets from Japan, Spain and America. He has important publications and issues with legendary and universal poets with his paintings and prints.

He studied in several universities and institutes of Japan and Spain, including the Faculty of Fine Arts of U.C. Of Madrid or the University of Theology of Tokyo. He was also the direct and outstanding disciple of great masters of these various artistic disciplines, both painting and music, dance and literature.

Yurihito was the artist of the Galleries and top dealers of Japan and Spain; As Ueda Gallery (Ueda Culture Projects) of Tokyo or Gallery 57 of Madrid.

He is currently an artist of one of Japan's most prestigious gallery owners: Nagai-Garou Gallery of Tokyo. His works belong to the collections of prestigious private collectors, Museums, Institutions and International libraries of Spain, France, Portugal, Italy, America and Japan.

Yurihito Otsuki has made more than 30 individual exhibitions in Galleries, Institutions and International Museums, he has also participated in important collectives along with the works of the great masters of the XX century; Like those of Picasso, Dalí, Miro, Carder, Cristo, Jasper Johns, Hockey, Hartung, among others. Also in international fairs and events like; Tokyo Art Expo, NICAF (Japan), ARCO, Tentaciones (Madrid Edition), Sotheby's charitable auctions from Spain, among others.